Controlling the Conversation while Dating 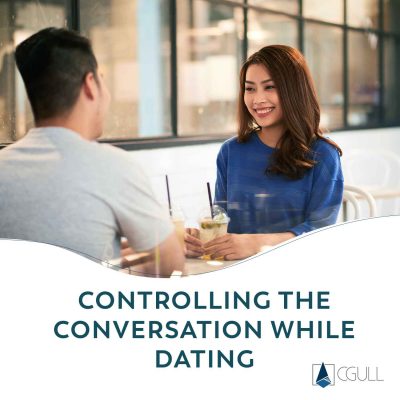 The purpose of having a conversation while dating is to get to know each other better, and to have fun while doing it. Also, it is about you controlling the conversation without looking like you are. So that it remains open and fun.

It is an art by itself. You can easily master this art by learning a few tricks and using them the next time you strike up a conversation with a lady.

Don’t preach. You might be an authority in your field of expertise, and if the topic comes up, it is natural to start a one-sided lecture on it. It happens more often than not, and even if the lady has any views on it, either she has no window to express it, or is intimidated by your grasp over the subject. Do not let that happen. It’s a conversation. Not a class.

Keep the topics positive. Play safe by steering away from controversial ones. Some topics are considered taboo in the dating scene. These include politics, religion, gender and children. People tend to have radical opinions on some things, and flaring tempers may replace the camaraderie and fun.

Put her wants first. While it is true that men feel it is tough to keep the conversation going with a girl and that they find it difficult to find things to talk about, if you are controlling the conversation you need to focus on what complaints women have instead. One for example, is that they feel the men’s ego stop them from hearing the women out completely. Another is that they feel men always carry an air of ‘I know best’, which discourages them from voicing their opinions in the first place. So, listen to the lady. Hear her out. Specially in a modern society like in Singapore where women are sometimes more qualified than men, it is important that you give her more than the ‘air time’ due to her, for her to share her future plans and goals with you.

Follow the 80-20 rule. Take time to understand the appropriate ‘talk time’ ratio. Speak only 20% of the time, either to continue the conversation or to ask questions, and let her speak for the remaining 80%. Even the most self-proclaimed introvert would enjoy talking if the right topic is brought to the table, and the listener is attentive.

Use open-ended questions. Keep the conversations flowing. Things like “If you could choose to live anywhere in the world, where would it be and why”. Or “Describe your ideal day to me”. While she answers you will get a better idea of what other questions she could warm up to. Having said that, women are generally more versatile in topics of conversation. So it is all right to swing the conversation as you see fit. Also, in our Eastern context, it is common that people are looking to be led in a conversation. And are likely to share an opinion on any topic anyway. Having a topic to go with doesn’t have to be difficult and neither does the topic have to be sophisticated. You can simply ask her about her thoughts about her career. Share your views by all means, but when she is sharing hers, genuinely hear her out.

Allow conversation threads to happen. Conversation threads happen when multiple topics follow one after the other, taking off from the previous one. It happens all the time, and is a good thing. Say you are talking about a person. Turns out that person lives in Australia. So then you ask her whether she would live in Australia given a chance. Maybe she replies describing how she has always imagined herself in Australia, but always with two dogs. Three conversation threads have happened by now. You can let it flow on, or you could, after she has talked about her dream dogs, guide the conversation back to where it started.

That’s it. Few tricks to understand rather than to learn by heart. And you’re ready to talk yourselves up a storm!

But if you still feel you need some more guidance, feel free to get in touch.

PrevPreviousThe Wingman, or Wingwoman
NextConversational Ratios – How Much effort do we put into a conversationNext