The Wingman, or Wingwoman 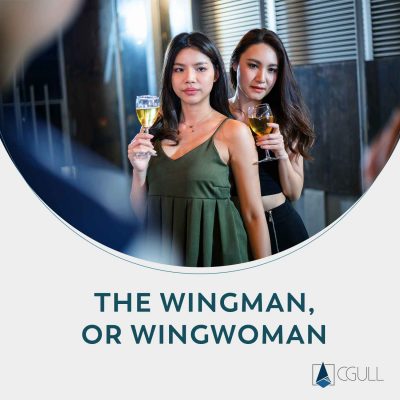 Never underestimate the powers of the wingman if you are contemplating venturing into the dating scene.

A wingman is your friend who will accompany you to social gatherings, and make it easier for you to be considered date-worthy by the women present, will help filter out the undesirable ones, and bring about opportunities for you to interact with the potential ones. A wingman will also verify or endorse your worth, and at the same time, jump on the grenade for you.

But the term ‘wingman’ has nothing to do with gender. In fact, the best wingmen are actually women. This is because women are naturals at becoming a part and parcel of social situations with women in them, and hence can get you in easily too.

Just her presence sends out unspoken messages about you to the women around you.

Her presence implies that since she is with you, you are pre-qualified to be seen around with. It saves them the hard work of finding out for themselves.

Her presence implies that you are safe, and do not pose a threat to women. So they can put their guards down and be comfortable around you quicker.

Her presence implies that you are not a creep who is out on a ‘hunt’ for women. Women like to be wooed. Not hunted. If, for instance, you had a male friend with you instead of a woman, you would have been suspect, and the women might have given you a wide berth.

Her presence implies you are comfortable being around women and are able to have a decent conversation without feeling awkward. The women will not want to waste their time hand-holding you out of your awkwardness.

But then the argument arises that if you have a woman as your wingman, women might get the wrong message that the two of you are together, are a couple, and so you are not a potential date for them. Be rest assured that will not be the case. In fact, if they do think you are together, all the above benefits of having a woman accompany you are validated more strongly. It plays up the perception that you have already proven yourself to be a suitable mate, that women can trust you, and that you do not pose a threat in any way. This makes them let down all their guards and be very comfortable around you.

Then comes the next job of the wingman…. to tell them aside, after they have dropped their guards, that you two are only close friends and not in any kind of relationship.

A guy or a group of guys can inadvertently make good wingmen for you in certain situations, without even intending to, or in fact without even knowing you personally. Say you are with your woman wingman in a social environment. The women will readily make conversation with you for all the reasons mentioned earlier. But they won’t do so with the bunch of guys. They will look on them with suspicion, thinking that they are ‘hunting’ for women in a pack. The only way the guys are going to have any interaction with any of the women is by taking the lead in the conversation. Where, since the women are on their guard already, the attempt might backfire. And… that works in your favour! The women will invariably compare you with them, and that will paint you in a better light!

So act wisely. Don’t be those other guys. And find yourself the best wingman… a woman!

1 thought on “The Wingman, or Wingwoman”