On doing the ‘right thing’ during dates 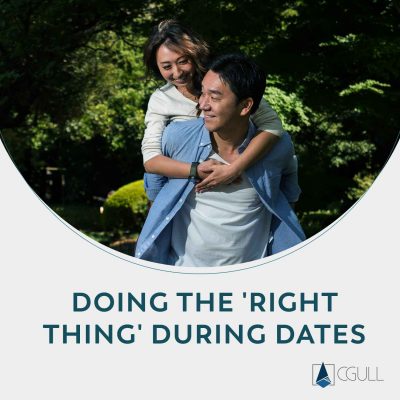 As modern men, we have heard the phrase “Be a man” multiple times throughout our lifetime. This ‘advice’ can come at us from various age groups, social circles and also from both genders. But usually, this is always to ask of us to do the self-sacrificing act, to risk humiliation or amend wrongs.

One can always argue that the people around us have taught us to behave and act in a particular way. And people who step out of this line will usually be outcasted from the group or society. This is not a problem today as we can always recede towards online games and find solace in the internet. But in the past when humans lived in tribes of about 50 people, banishment from the group could mean death. This is because if an individual does or acts in a way that is not acceptable to the tribe, they are no longer welcomed within the group. The group would start by poking fun at or being hostile towards the individual.

At a young age, the first education we have had on our behavior would be taught to us by our parents. Some of these ‘lessons’; can be taught to us in terms of folklore (Small as little red riding hood teaching kids to not enter the forest or drifting off by themselves) or fairy tales (Santa Claus bringing presents to only good children). Today, one can argue that these are manipulative methods used by adults to trick children into acting and behaving in certain ways. It is definitely easier to use scare and bribe tactics rather than reason with children at a young age who might not understand the complexity of life and are still unable to think or care about anyone other than themselves.

The thing is that some children grow up into adulthood with lesser ‘lessons’ than others. And these issues can manifest into problems with society in their adult life. If such things are needed to be embedded into people as they mature, is it possible that the idea of courtship also needs to be educated? In Singapore it is almost unheard of that a parent would educate their child in the ways of courtship, let alone the fact that courtship today is drastically different from several decades ago.

Currently, most of us determine the right things to do in courtship would be to pull chairs out for women, to open doors for women and to send her home after the date. But where were these acts and behaviors initially taught to us? For most of us, these commonsensical routines were first introduced to us by our peers and reinforced by the media such as movies or cartoons.

Boys were taught that they had to make the first move and it is normal for a man to do whatever it takes to win the love and affection of a woman. This could be in the form of bribes (paying for dates), acts of service (sending her home) or display of status or wealth.

If you were to ask most women, these three P’s (paying, performing and pursuing) are nice gestures from a man, but they are not vital to sparking a connection. Most of the time it is the energy that the man gives off, the confidence and the ability to make her feel comfortable. These are not ‘things’ that you have to do, but rather traits that you must first possess. If you come off as an energy vampire, not confident or make her feel uneasy during your interactions with her, no amount of paying for the meal, how big a role you hold in your company or how expensive the car you drive would matter – unless you are looking for a gold digger.

The key here is to remove the shackles of things that do not work and look at the situation again. If you are doing the pre-programmed ‘right’ things that society and television has taught you to do on a date or in courtship, know that these are just crutches for a boy entering his teenage years who still needs some form of guidance when he is still finding his identity. It is true that these ‘tricks’ or gestures used to work decades ago with a young woman who is also finding her footing in her early years. But when we age, with more life experiences, our mentality and methods have to mature and expand as well. The old tricks and ways of courtship do get more complex as both parties are looking for something more. The games played are more complicated and tests get harder to pass.

So think for yourself, do what you feel is right on a date. Let your intuition guide you through things. There have been studies conducted whereby it proves men are as capable as women in accurately detecting emotions in others (ironically, when they are paid to do so). So if you are detecting that she might be uneasy on a specific topic that is being discussed, change it. If it seems like she is enjoying herself, keep it up. And if she seems like she is tired, it’s time to end the date soon. The more ‘right’ things to do on a date to show that you ‘get it’ and are the kind of man that takes care of her and the people around you.