5 Things Girls Want Guys to Do on a First Date 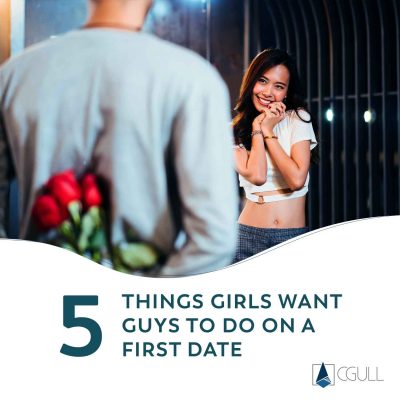 Whether you’re looking for a fun hike in the rough wilderness or a fancy evening out in a sophisticated restaurant, there are some basic rules of behavior. Even if things get more casual later on in the relationship, making the initial effort is always appreciated.

At first it may seem a bit obvious, but the simple idea of “showing up” goes beyond just arriving. First, there’s the idea that a girl wants her date to be on time. In the information age, however, showing up means also being present for the date. Phones should be shut off, texts ignored, iPads left at home. The guy’s attention and intention should be right there for the date, so that for at least those few hours the girl feels special.

Depending on the date, dress codes can vary. Whatever attire is appropriate, though, it is nice for the man to make an effort in his appearance. This doesn’t necessarily mean wearing expensive clothes. The first date might be all about taking a trip to an apple orchard, going scuba diving, or some other activity that precludes fancy dressing up.

A guy can always make an effort to look nice, though, wearing clothes that complement his features and taking care of personal hygiene such as combing his hair, shaving, etc. Like a woman’s makeup, it may be best if it doesn’t look like he did anything at all, but if he made no effort at all, it will show as well. That can make the girl feel unimportant and not worth the trouble.

The days of the guy automatically paying for the first date are long gone. Often women want to make sure they don’t feel beholden to their dates, and so they will go “dutch,” which means each person pays for themselves.

If that’s the plan from the beginning, it’s fine; however, there is enough holdover of tradition that it is nice for the guy to offer to pay for the dinner, movie, or whatever. It gives her an opportunity to assert her own independence and self-responsibility, or to graciously accept his gift, or even to choose to pay for it all herself! While it’s not necessary to be rich, and you can take turns paying later, the guy needs to be able to handle himself financially.

A first date is when people just start to get to know each other. It’s a time of discovery, of learning new things not only about each other but also about the world. While it’s fine to maintain your own opinions and beliefs, it is very unattractive to refuse to hear about others. One of the worst mistakes a man can make on a date is to speak badly about some idea or group, only to find out that it’s one of her ideas, or that she is a member of that group. For example, imagine going to a restaurant and hearing a man belittle those “silly vegetarians” and then hear his date ask the waiter if the restaurant has any vegan entrees? That’s not a first date that’s going to go very well.

What about the not-so-great first dates? Even if it’s an awful encounter (“I can’t believe what he said about vegetarians!”), it’s nice to follow up with a thank you. It shows appreciation and acknowledges the time commitment involved when the girl took a chance to go out with a guy. In some cases, that follow up may need to be an apology (“Sorry about the vegetarian remark”). In other cases, it might be the thing that tips the scale from “OK date” to “good date” just because it shows the guy cares.