Pick Up Lines to Avoid at All Costs 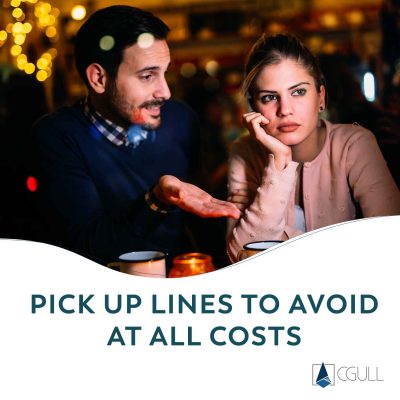 There’s a reason pick-up lines are a classic move: they can be really effective in getting someone’s attention. But do they really work in the real world? This is a question that has been asked by people for years, and unfortunately, there is no definitive answer.

Some guys swear by them, while others believe that they are nothing more than a waste of time. The truth is, it all depends on the situation and the person you’re talking to, as well as on the line itself – and how you use them. Some pick-up lines can definitely help you break the ice with someone you like, while others will just make you look desperate.

Why pick-up lines aren’t ideal for starting a conversation

Using a pick-up line can seem like the easiest way to break the ice. If they’re used in the right way, they can be an effective tool. However, if they’re not used correctly, they can have the opposite effect, make you come across as creepy or desperate, and can end up turning people off instead of attracting them.

In fact, they can often have the opposite effect, making the person feel objectified or like you’re only interested in them for superficial reasons. If you want to connect with someone on a deeper level, try starting a conversation based on mutual interests, or using conversation starters, instead of relying on a cheesy pick-up line.

Pickup lines you should avoid – what a mistake!

There are plenty of pickup lines that you can use to try and impress someone, but there are also some that you should avoid. These lines may make the person you’re talking to feel uncomfortable or even offended. If you want to make a good impression on someone, avoid using pickup lines that are cheesy and disrespectful. Here are some examples:

No matter how confident you may feel, using cheesy pick-up lines when trying to start a conversation with a woman is always a bad idea. Studies have shown that these types of lines actually make women less likely to be interested in you. Instead, try using more natural conversation starters that allow you to get to know the woman better. This will increase your chances of success while also making her feel more comfortable around you.

CGull is Singapore’s first male-focused relationship coaching center, equipped with a modern-day attraction system. We are dedicated to helping men find and keep the woman of their dreams by teaching them self-confidence, self-esteem, and charisma skills that will help you get the attention of your dream women – whether it be on social media or in person!

If that sounds like something you want for yourself or someone else in your life, let us know, and we can further discuss our services.

1 thought on “Pick Up Lines to Avoid at All Costs”

PrevPreviousHow To Choose The Right Dating Coach
NextOnline Dating: What To Do and What Not To DoNext