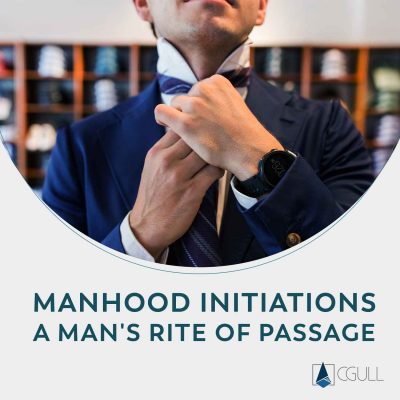 Initiation into adulthood has been an age-old concept in the history of civilization, and has been present across most cultures through various customs.

The rites of passage from boyhood to manhood vary as per what the boy is being groomed for, which depends on the needs of the tribe, civilization or society the boy is a part of. For example, one boy can be initiated into manhood for the purpose of mating and then helping nurture future generations. Another boy can be initiated for combat to protect his tribe against external threats. Cultures can have both kinds of initiation, or any one, depending on their priorities and the realities of their conditions.

Some rites of passage are symbolic, while others are outright gruesome. For example, amongst Australian Mardudjara Aborigines, when a boy comes of age, he is circumcised; not by a medicine man, but by the elder men in the tribe. The boy has to lie on his back. One man sits on his chest so he cannot move. Another man cuts off his foreskin, which will later be fed to the boy. With this over, he will be deemed a man who has overcome his ‘childhood thinking’. After this, things get even worse for the boy-turned-man, but this blog is not a horror one. So, I will refrain from further details.

These rites, however gory, have served our species well. This is because they have included the imparting of knowledge, wisdom and combat skills to the young men, who in turn have been given their timely recognition as men and been accepted as adults who can be trusted in the society.

In a society as most of us know if today, initiations still happen. It’s just that they are found in milder forms, are sometimes purely symbolic, and are vastly different from what we have been describing. Such initiations are happening around us all the time.

Fraternities, sororities, weddings, funerals, graduation ceremonies – these are actually examples of initiation ceremonies that prepare the young men to be responsible enough to take on the next chapter in their respective lives. But such events should always be monitored, or else some can spell disaster, a recent example being the case of the St Kevin’s College students’ public sexist chant causing havoc in Melbourne.

An interesting point to note concerning modern Western society is that there are two completely contradictory schools of thought on what it takes to be a man.

One teaches their men to not cry, to ‘not be a girl’, and to prove their ‘masculinity’ by swallowing emotions and contributing to the society materialistically.

The other school teaches their men to stay in touch with their inner femininity and their emotions. They are taught to replace their egos with their feelings, and encouraged to be more like women.

But in our modern Eastern society, parents do not aid their children in the knowledge of growing up at all. Sex talks are rare between the adult and child. Parents take a backseat in encouraging a child to develop the ability to attract a mate or take care of his own sexual health. Most of the (mis)information that young adults have are from what they manage to gather online, as they are expected to ‘know how it all works’ on their own.

As a result, they grow up with a very limited set of skills with a skewed and fake idea of romance and sex. They grow up unguided; to positions of power where their families or employees will look to them for guidance.

This is a severe problem as we live in a time with much more complicated social dynamics compared to what generations before us ever experienced. From understanding the nuances of texting, online dating, social media posts, gender roles, office etiquette and much more. Today, we have a term called ‘failure to launch’ which describes the idea of boys not growing up or equipped with the skills or mind-set needed for adulthood. Warren Farrell has written a book called ‘the boy crisis’ that addresses issues that boys are facing while growing up.

At Cgull, we wish to bring these issues to light, and to provide a safe space for men who struggle with the rights and wrongs of ‘being a man’ where they can ask questions and seek guidance.